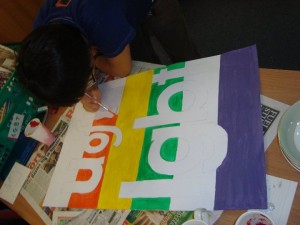 Last Thursday was IDAHO/IDAHoT/IDAHoBiT – International Day Against Homophobia. IDAHO started as a day to commemorate the World Health Organisation’s decision to remove homosexuality from its list of mental disorders; it is now a campaign calling for the international decriminalisation of homosexuality and to combat homophobia, biphobia and transphobia (hence the different acronyms). I spent the day with Warwick Pride, first on the panel for a Trans* Q+A and then listening to speakers from Movement for Justice.

Meanwhile, Helen Finch was discussing how we, as academics and tutors, can “foster a queer-positive environment at work” and in research. I’m a tutor – but I’ve also been a Trans* Welfare Officer, am involved with LGBT activism, been involved with LGBT student groups and the NUS LGBT campaign and yes, almost ten years ago, was that rather anxious student feeling very invisible and very alone.

As Paul Baker observes, LGBTQA students face additional pressures at university and are at increased risk of dropping out. As someone who’s been involved in LGBT student welfare from within the student union and has responded to more than a few concerns about homophobia, transphobia and biphobia in teaching environments, I was determined to bring this awareness to my teaching. I’ve written about a few key points that I find helpful to remember.

– Assume nothing. Never assume that everyone in your seminar room, lecture hall or lab is straight, cisgendered, or, for want of a better term, sexual. It’s easy to assume you aren’t teaching any LGBTQA students just because they don’t conform to what you expect an LGBTQA student to look like, but I assure you, they are there. LGBTQA students have families and friends, and you might be teaching them too.

– Avoid heteronormativity. Heteronormativity aligns biological sex (itself a problematic concept), sexuality, gender identity, and gender roles into one rather messy whole. It’s a constant and pervasive thing – you probably encounter it every day in advertising, in magazines and newspapers, on the TV and even in things like dress codes and casual conversation with strangers. Heteronormativity isn’t just harmful to LGBTQA people; Meg Barker wrote about it in a blog post and outlines the damage it causes to people inside and outside it. If you can, challenge these norms – but at the very least, don’t support them.
Things you can do include not assuming that all your female students are interested in male partners and all your male students are interested in female partners. Things like jokey comments along the lines of “typical man”, “that’s something a woman would say” or heteronormative assumptions about women all liking shoes and men all liking sports seem harmless, but can be alienating for students who don’t conform to those ideas. If possible, (gently) challenge these if they come from your students. If your examples involve people and relationships, don’t base them all around heterosexuality. I was checking a book (Paul Baker and Sibonile Ellece’s Key Terms in Discourse Analysis) for a definition and saw that the example was “Carol kissed Mary”. The concept it was illustrating – that of semantic role – could just as easily been illustrated by “Dan kissed Mary”. But if “Dan kissed Mary” is acceptable, why shouldn’t “Carol kissed Mary” be acceptable? It’s a small thing, but seeing their identity and relationships reflected in teaching material can be really important for LGBTQA students.

– Avoid cisnormativity – the assumption that everyone’s gender identity corresponds to that which they were assigned at birth, or, indeed, which is on their university records. As one of my many jobs, I work as an IELTS invigilator. Exam candidates have to shade in a box for whether they are male or female, and one of the invigilators I work with used to comment, every time, that “this should be the easiest question of the day” for them. For some people, it’s not an easy question – they may not be out as trans, they may not be able to change their legal gender, or, in the case of non-binary gendered, genderqueer and agendered people, there may not be a legal gender for them to change to. While the Higher Education Statistics Authority (HESA) have revised the way gender will be recorded in their new gender and sex categories for student records within Higher Education, it’s still important to remember that students may ask you to call them by a different name or use different pronouns than those in their student records. To me, it also means bringing an awareness of the fluidity and diversity of gender to my teaching and so acknowledging that these are complicated things.

– Acknowledge queer scholarship – probably one more relevant for arts, humanities and social sciences although I’d love to hear if/how scientists, mathematicians, engineers and others do this. Helen suggested “contextualis[ing] sexuality and gender as discursively formed and historically understood” in literature studies; there’s some interesting discussions in bioarchaeology about “gay” cavemen; there are debates in history about whether various historical figures were gay (and what we mean by “gay”), such as Christabel Pankhurst. One of the seminars I taught this term was on language and gender, and I tried to lead my students from thinking about “women’s language” to thinking about where men and women learn language, then to looking at short extracts from anonymised conversations and guessing what genders the speakers were, then to thinking about the way power was enacted and negotiated in these exchanges and how this affected what gender the speakers were read as. In my case, there’s a rich vein of queer linguistics that informed my teaching and judging from the conversations during the seminar, the students seemed to find it an exciting and challenging way to think about gender.

There’s lots of other issues involved in this; one of the things Helen touched on was whether to out yourself when teaching. In my case, my decision to go to a couple of student LGBT events – I’m still a research student after all – meant that if any of my students were there, they would have seen me. I made a deliberate decision not to go to any drinking student LGBT events, partly because I don’t have time for hangovers but also because I want my students to have fun, do some silly and/or inadvisable things if they so desire, and enjoy their first year at university without worrying about being seen by their tutor. I’d probably feel a bit conflicted if I saw one of them get kicked out of the NG1 toilets or something!

I’m still pretty new at teaching though, so if you’ve got any advice or comments I’d be really interested in hearing them.