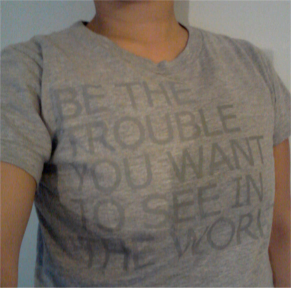 Today marks National Coming Out Day and my facebook and twitter feeds have been full of the wonderful, brave people I know announcing their LGBTQ identities. Somewhat predictably, I have complicated thoughts on the topic.

Stella Duffy writes movingly about the importance of coming, being and staying out while my fellow linguist Anna Marchi writes about the importance of visibility. Neither of them have found it particularly easy but both speak of coming out as a duty; they recognise that their relative privilege allows them to come out in safety, if not without difficulty.

They both note that coming out is also not a single event where you burst from the closet in a shower of rainbows and glitter. Instead it’s a process of coming out to lots of people. I’m inclined to think there’s a difference between coming out to your family and friends and coming out at university, at work, to your GP and, should you get your relationship legally recognised, legally as well as in your social relations. There are no rules on who you should be out to, in what order you should come out to various people – you might tick a box in a university diversity survey before you tell your family, for example – and how long this process should take. It won’t ever end, but it’s your choice whether you tell people immediately, gradually, or at all.

However, coming out is not necessarily easy or straightforward, especially if one must negotiate religious and/or cultural issues. There are lots of people for whom coming out is difficult and dangerous, and I worry that days like these put pressure on people to come out when it’s not safe to do so. There’s a particular kind of sadness when you see people proudly declaring their sexuality and gender identities and knowing that you cannot join them in that.

I’ve been reading Avory’s post on the problem with the LGBT movement’s obsession with coming out and Hasan El Menyawi’s 2006 discussion of coming out in Egypt, the globalisation of a US-centric narrative of coming out and activism from the closet. El Menyawi reconceptualises the closet as a place of safety and community, with flexible, ever-expanding walls. He argues that “activism from the closet occurs by publicly hiding — covering — one’s gay identity outside of the collective closet, but still actively engaging in activism — hidden activism”. Such hidden activism may involve campaigning on privacy rights, questioning the close relationship between religion and the state, or activism on issues such as “economic revitalisation, democracy, rule of law, and human rights more generally”. Avory expands this idea, observing that “there can be a joyous safety in sharing our brilliant ideas and forming unique relationships with our peers without having to first make those ideas and relationships fit for mainstream public consumption”.

So while coming out is brave and important, let us not devalue the closet, and let us not forget those for whom the closet is shelter and protection rather than confinement.