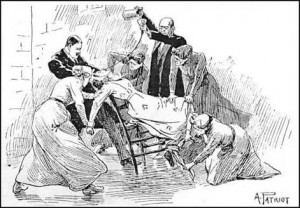 Passive forms of resistance – for example, the chaining self to railings issue, which as far as I can tell from my data was either systematically underreported to the point of invisibility (unlikely, given news values) or didn’t happen with any frequency – is widely discussed and disseminated today. Forcible feeding is another issue widely discussed now. Part of this is because hunger strikes have a resonance today – as a child growing up in Britain I knew of Bobby Sands, and over the past days I’ve read of Abdulhadi Al-Khawaja of Bahrain and the Palestinian hunger striker Khader Adnan. Emily Wilding Davison’s death is also widely discussed in present day material, despite it not being sanctioned by WSPU leadership and ambiguous as to her intentions – it’s probably among the best known acts of the suffrage campaign. It’s dramatic, but then so was lots of other suffragette direct action – planting a bomb in David Lloyd George’s unfinished house for example.

I’d argue that what these models of resistance have in common is their emphasis on female passivity, injured female bodies and the pain and humiliation suffered by women; as Laura Mayhall says, they’re about the “individual exhibition of women’s bodies in pain”. It’s an image of the woman as martyr, who experiences personal agonies in order to bring about social change. And I think there’s something damaging about that – it teaches children, girls in particular, that the way you protest is through personal suffering. It’s protest turned inward; the depth of your resistance shown through how much pain you are willing to bear. I don’t think that’s a healthy thing to represent as the extent of suffrage protest.

The suffrage movement campaigned through political channels (petitions, deputations, canvassing MPs), peaceful protest (demonstrations, rallies, public speaking, tax resistance), the arts (writing, drama and visual arts) and militant direct action (window breaking, attacking politicians, arson). There were multiple channels of resistance and I think it’s important that these are taught. To me, this says something about how imaginative and diverse protest can be, the many forms it can take and perhaps something of the importance of these many types of campaigning. In these heady times of austerity cuts and the rise of co-ordinated grassroots anti-cuts groups, I think it’s important that we’re aware of the rich history of democratic protest and its potential to effect change – not as single, isolated, dramatic events, but as a narrative of resistance.