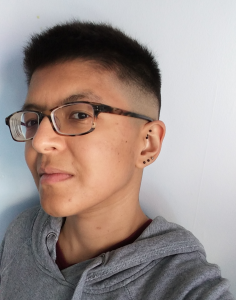 Hi, I’m Kat and I’m a lecturer in English Language and Linguistics at the University of Roehampton in London, UK.

My research interests are in corpus linguistics, critical discourse analysis, digital humanities, gender, queer theory, language and ideology and language and politics. My PhD was on the media representation of the British women’s suffrage movement and you can read more about it on this page about women’s suffrage.

I’m interested in LGBT, queer and gender issues from both an academic and activist perspective. I am particularly focused on issues affecting non-binary people and non-white trans and/or queer people. Most recently, I have worked with Public Health England, Stonewall and the Race Equality Foundation to explore and begin to address some of these issues. My current research examines pronoun use when representing transgender people in the media.

In my spare time(!) I enjoy reading and, as evidenced by this site, messing around with computers. I consider tea a physical and psychological necessity and seem to be curating a not insignificant collection of teas.

This blog came about because apparently it’s how all the cool kids are disseminating their research these days. I discuss my research, but I also try to write about how my research relates to present day protest movements, activism, books, academic experiences, other things I’m interested in, and sometimes my life as an early career researcher.

I’m the older sibling of the much cooler Dr Jen Gupta, astrophysicist, outreach officer and giant nerd. You should visit her site! Seriously, she’s much cooler than me.