My friend Maria writes the excellent Gastronomy Archaeology blog. If you’ve ever wanted to find out about Renaissance recipes and/or make your own buttered beer, this is the blog for you.

Maria’s blog highlights a complex history of food and eating. Today I stumbled on a 1915 recipe book produced by the Equal Franchise Federation of Western Pennsylvania and was intrigued to find a recipe for “nut turkey”. The cook is directed to “form [the nut mixture] into the shape of a turkey, with pieces of macaroni to form the leg bones”. I admit it – I am having some trouble visualising this and tried to sketch it: 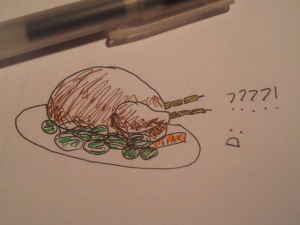 This can’t be right

However, I am intrigued that nut roasts were around nearly 100 years ago and were being eaten at similar meals as they are today – to replace the festive turkey. The cookbook argues that nuts are a valuable, cheap source of protein but I can’t help wondering if there’s more to it than that. Ann Morley and Liz Stanley observe that some British suffrage campaigners had interests in a “very familiar collection of causes […] – feminism, children’s rights, animal rights coupled with vegetarianism, pacifism and theosophy”, noting that with the exception of theosophy, the combination of these causes were thought to have been invented by late 20th century radicalism. Did American suffrage campaigners have interests in a similar constellation of causes? It makes me wonder what we’re seeing here – is the nut turkey something created out of convenience, constraints on tight household budgets or for ethical and ideological reasons?

I also rather liked the non-recipes:

(Unless you wear dark glasses you cannot make a success of Anti’s Favorite Hash.)

A little vitriol will add a delightful tang and a string of nonsense should be dropped in at the last as if by accident.

Stir all together with a sharp knife because some of the tid bits will be tough propositions.

I assume that “Anti” refers to “anti-suffragists” but could also be a homophone of “aunty” depending on accent – nice bit of wordplay there.

(always to be taken with a grain of salt.)

I’m in the process of writing a long post on interdisciplinarity and actually enjoying writing my current chapter(!) so I hope you’ll be satisfied by some nut turkey for now.