To “wage a war against all women”: Elliot Rodger, girls, women and corpus linguistics

This is a working paper currently being developed for publication – comments and feedback are very welcome! 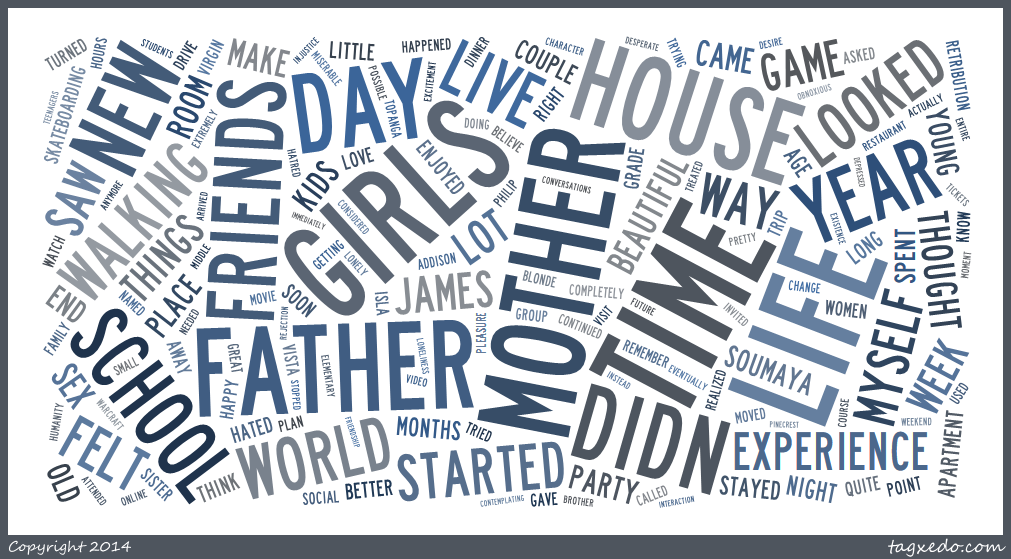 Like many people, I was shocked at the Isla Vista shootings. In an effort to understand what happened, I read – a lot. There is a collection of links about Elliot Rodger, rape culture and misogyny at the end of this post.

I then downloaded Elliot Rodger’s manifesto and approached it with corpus linguistic techniques. I first calculated keywords, then go on to examine girl, girls and wom?n in more detail.

This table shows the top 25 keywords when compared with the British National Corpus (BNC). A keyword occurs more frequently than we’d expect; in corpus linguistics, we work this out by comparing how often it occurs in a reference corpus (in this case, the BNC) with how often it occurs in the corpus we’re interested in. Words that are more key are more frequent in the target corpus than we’d expect from looking at the reference corpus.

I’ve used the BNC because it’s a large general corpus that contains both speech and writing and which is balanced across different text types and genres. If I used a different reference corpus it would show me different things which may or may not be useful. Comparing Rodger’s manifesto with other manifestos written by ideologically-motivated murderers might be interesting, as would comparing the manifesto to other texts written by misogynists. However, the BNC does a decent job of highlighting both the individual characteristics of Rodger’s manifesto and a more general discourse of misogyny.

We have placenames like isla, vista, santa, topanga and barbara; words indicating family members and social relationships like mother’s, father’s, mother, father, Soumaya and friends; modal verbs like didn’t, was, couldn’t, wasn’t and would; and lots of first person pronouns like I, my, me, I’ve and myself. Finally, we have retribution, the name Elliot Rodger gave to the day of his attack. When we think about what kind of writing this is – a manifesto in which Rodger outlined his personal history, explained the worldview that led him to such an act of violence, and detailed his plans – this is unsurprising.

With the exception of line 11, the beautiful girl exists as a symbol of status and is usually found on her male partner’s arm or by his side. This is reflected in the cluster with a beautiful girl which makes up 5 of the 11 occurrences of beautiful girl. There doesn’t appear to be evidence of her agency, let alone her personality or individuality. Instead, she is rather like a bespoke suit or pair of expensive cufflinks. When Rodgers asked “[w]hy does he deserve the love of a beautiful girl, and not me?” it is without asking how he would love someone back.

We also find that a girl occurs 37 times and the girl occurs 11 times. Interestingly, the girl predominantly appears because Rodger noted that she is with someone else. The next set of concordance lines are longer so you can see that more clearly.

Rodger focused on appearances, especially perceived disparities in attractiveness between women and the men they were with. We also see evidence of adjectives like blonde and white. While it is important to read Rodger’s actions in context of his misogyny, it is also important to acknowledge the role of race. The girls that Rodger focused on are tall, pretty, blonde and white; brown only appears in the context of martial arts (brown belt, 2 occurrences) and black in the context of skin colour (7 occurrences, all describing boys/men), a black carpet (5 occurrences), clothing (2 occurrences) and Rodger’s own black hair (3 occurrences). Dark is largely used metaphorically, and the only woman described as having dark hair is his father’s girlfriend (“I saw a woman with dark hair and fair skin standing in the kitchen, and she introduced herself as Soumaya”). Brunette only appears once and is used to describe his sister’s boyfriend’s ex-girlfriend (“My sister even showed me a picture of one of his ex-girlfriends, a pretty brunette white girl”). Brunettes doesn’t appear at all. His stepmother, Soumaya, and his sister’s boyfriend are both people he resented, saw as an intrusion into his life, and who highlighted his lack of sexual experience compared to other members of his family.

It is also very clear from the data which women Rodger found attractive, that he conflated race and attractiveness, that the women he was most attracted to are also unambiguously white, and that he was deeply angered by ugly/black men having sex with beautiful/white women:

“How could an inferior, ugly black boy be able to get a white girl and not me? I am beautiful, and I am half white myself”

“If this is actually true, if this ugly black filth was able to have sex with a blonde white girl at the age of thirteen while I’ve had to suffer virginity all my life, then this just proves how ridiculous the female gender is. They would give themselves to this filthy scum, but they reject ME? The injustice!”

“They then had the audacity to tell me that they lost their virginity long ago, bragging about all the girls they had slept with”

As the following concordance lines demonstrate, Rodger discussed girls as a monolithic entity. They all dress alike, his friends pursue all of them, they all flock to the same boys – and, crucially, they all view him with disdain. This is highlighted in the case of none of the girls: Rodger complained that “[t]hey all started socializing right next to me, and none of the girls paid any attention to me”. Again, there is a strange lack of personality or individuality ascribed to these women.

Something different happens when Rodger described one, two or some of the girls. In these cases, Rodger noted his sexual attraction to them, the things they do that sexually provoke him (importantly, this can be as innocuous as doing a handstand while messing around with your mates – if you are a “beautiful blonde girl”, then simply existing is a sexually provocative act for Rodger) and their interactions with other men.

Reading the concordance lines, there is a strikingly lack of attempts by Rodger to engage with them. I found just one: “One time, as I was walking across the huge bridge that connected the two campuses, I passed by a girl I thought was pretty and said “Hi” as we neared each other. She kept on walking and didn’t even have the grace to respond to me. How dare she! That foul bitch”. Instead, girls are remote, distant – a monolithic entity that constantly rejected and humiliated Rodger yet to which he remained sexually attracted to. To Rodger, the actions of one reflect on them all; the rejection from some girls is a rejection from all girls.

If girl and girls are constantly described in terms of their sexual attractiveness and callousness, with Rodger caught between rage, self-pity and arousal, then wom?n is where his hatred of women is really displayed. Here, the ? in wom?n is a single character wildcard that means that results for both woman and women are included. There are 86 occurrences of wom?n in all.

Interestingly, there are two occurrences of love women, but as the quotes show, this love comes with conditions:

“All I had ever wanted was to love women, but their behavior has only earned my hatred. I want to have sex with them, and make them feel good, but they would be disgusted at the prospect. They have no sexual attraction towards me. It is such an injustice, and I vehemently questioned why things had to be this way. Why do women behave like vicious, stupid, cruel animals who take delight in my suffering and starvation? Why do they have a perverted sexual attraction for the most brutish of men instead of gentlemen of intelligence?”

“All I ever wanted was to love women, and in turn to be loved by them back. Their behavior towards me has only earned my hatred, and rightfully so! I am the true victim in all of this. I am the good guy”

While Rodger claimed to want to “love women”, this is quickly turned into further justification for his sense of victimisation and his rage. It’s difficult to imagine being able to love someone you can describe as “vicious, stupid, cruel animals”. As seen in girl and girls, Rodger focused on the men he perceived all women as being attracted to – “the most brutish of men” – and clearly positioned himself as superior, again reflecting the hierarchies he constructed and his belief that those further up the hierarchy deserved sex.

Concordance lines for all women are below.

As these concordance lines show, women are again conflated into a single entity, one that is responsible for provoking Rodger into such violent acts. He railed against “all women for rejecting me and starving me of love and sex” and threatened to “destroy all women because I can never have them” and “wage a war against all women and the men they are attracted to”. Of the seven concordance lines above, three reinstate his “hatred” or “hatred and rage” directed at all women.

However, Rodger firmly believed that women had brought it on themselves and were responsible for their own destruction. There are 11 occurrences of of women

Women are positioned as cruel and evil, but also powerful; Rodger railed against the injustices (1 occurrence), rejection (2 occurrences), humiliation (1 occurrence) and mistreatment (1 occurrence) he felt he experienced at the hands of women.

So what were girls and women to Elliot Rodger? The evidence from his manifesto seems to indicate that Rodger was deeply conflicted about them. They were simultaneously: beautiful, hot bestowers of status on their male companions and the yardstick by which a man could measure his worth; fickle, callous creatures who snubbed him; cruel, evil and deliberately withholding the love and sex which Rodger felt was his right; wholly vicious and deserving of hatred and destruction. In Rodger’s manifesto, women are not individuals, but are completely united in their rejection of him.

There’s obviously a lot more in the paper I’m developing for publication, but I hope that this post offers a an insight into how looking at just four terms can be very revealing.

Further reading:
Elliot Rodgers
What a close read of the Isla Vista shooter’s horrific manifesto, “My Twisted World,” says about his values—and ours
“Gay or Asian?” Race, Masculinity, and the UCSB Shooting
On Continuing to Live In the Same World that Made Elliot Rodger (and Many Like Him)

Rape culture
A Gentleman’s Guide to Rape Culture
Fat Girl PhD: The things we tell our girls
Girl On The Net: On whether you have a right to sex
Slut-shamed to death for saying yes to sex, murdered for saying no

Misogyny
Storify: Yes, All Men
Elliot Rodger’s California shooting spree: further proof that misogyny kills
Let’s call the Isla Vista killings what they were: misogynist extremism
A Look Inside the ‘Men’s Rights’ Movement That Helped Fuel California Alleged Killer Elliot Rodger
Elliot Rodger was a misogynist – but is that all he was?
Elliot Rodger’s fatal menace: How toxic male entitlement devalues women’s and men’s lives
Lessons From a Day Spent With the UCSB Shooter’s Awful Friends
‘PUAhate’ and ‘ForeverAlone’: inside Elliot Rodger’s online life
Your Princess Is in Another Castle: Misogyny, Entitlement, and Nerds
On the Geek Guys’ Elliot Rodger Think Pieces
#YesAllWomen: how Twitter reacted to the shootings in California
Why It’s So Hard for Men to See Misogyny: Men were surprised by #YesAllWomen because men don’t see what women experience