Perhaps unexpectedly, My Transsexual Summer has focused some of my thoughts about representation, power and self-representation.

There are well-worn tropes in trans documentaries – so well-worn that there is more than one drinking game out there, with invitations to drink for things such as “any reference to genital surgery that refers to “becoming a woman” or “finally a woman””, a “close up of dotted lines in magic marker on pale fleshy body parts”, “if anyone uses the phrase “a man trapped in a woman’s body,” or vice versa”, or to just to down the whole bottle for a camera in an operating theatre. This is the kind of representation the trans community is used to.

My Transsexual Summer was greeted with nervous but hopeful anticipation from the trans community. Channel 4 had signed Trans Media Watch’s Memorandum of Understanding, agreeing to treat trans issues sensitively and accurately. Trans Media Watch was consulted while making the show. These things are a step forward in ensuring that trans people are not just the subjects of a documentary, but have a say in how they are presented in the programme.

Trans people have also written about the My Transsexual Summer series. Juliet Jacques appraised the show and Paris Lees, who was consulted as part of Trans Media Watch, also wrote about the show. Again, I think this is positive – it’s important that specialist documentaries aren’t just reviewed by non-specialists, but that people who know about the area write about them. 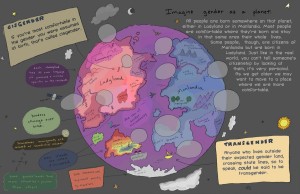 I don’t want to review the show, but instead want to focus on the representation part.

One of the issues with representation is that it simplifies and silences identities in favour of identities constructed by those in power. This is very relevant for the trans community which encompasses a multitude of genders, both binary and non-binary. These identities can be complex and difficult to understand for people who don’t experience them first hand, and are often poorly understood outside the trans community and gender activists. The illustration (click for a larger image) shows this in a playful way – while there are gender identities that roughly map onto “man” and “woman”, there are different ways of expressing manliness and womanliness. Some people are born in one place and move to another. There are identities that aren’t “man” or “woman” and there are also identities that are fluid and don’t stay in one place. This is a pretty simple explanation but it’s a huge area. I hope you can see how complicated gender identity can get.

There were hints that some of the My Transsexual Summer participants identified or had identified outside the gender binary – that they didn’t identify as totally male or female – but there was little to go on because it simply wasn’t discussed or really raised as a possibility.

Max, one of the participants, writes about his dissatisfaction about how they were portrayed:

Now I am watching the show and I see myself, and Fox reduced to bit parts and supporting roles, I see Karen’s story reduced to her anatomy and I see Donna portrayed as a caricature of her real, intelligent self. I see narratives that focus on boobs, unemployment and surgeries and make up and phallus’ privileged over narratives that deal with achievement, employment, happy families, and diversity of gender, race and belief.

He suggests that this was deliberate – that the complicated bits that didn’t fit a simple narrative were edited out, and instead the documentary focused on the kinds of issues satirised in the drinking games.

There are some complicated issues here about who and what gets presented to a largely non-trans audience as trans, and the relationship of trans people to mainstream media producers. Trans people are effectively in a bind – on one hand it’s important to be in mainstream programmes for several reasons. Mainstream programming reaches audiences who don’t read trans-produced media. It can be a useful resource to direct parents, friends, colleagues and supportive others to. It can be incredibly useful and validating for people only just realising they’re trans to see trans people on TV. In a world where trans stories are often ignored or treated as a freak show, My Transsexual Summer did a lot to humanise the people who appeared in it – it showed people who were trying to make a life for themselves, sometimes in the face of outrageous discrimination. Simply appearing in mainstream media demonstrates that you exist to people who were previously unaware of your presence.

However, on the other hand, there is an unequal power dynamic at work. Trans people are rarely the ones producing, directing or scripting these programmes – on board as consultants, but not the ones who make the decisions about what should and should not be included. Trans narratives and experiences are filtered and mediated by non-trans people – there are probably hundreds of hours of footage filmed for My Transsexual Summer but only four hours were actually shown. As Max suggests, the bits left on the cutting room floor suggest something more complicated but ultimately, that reflected the participants more closely. As Fox notes, “not nearly enough people picked up on the fact that most of the airtime was spent highlighting gender binaries and not exploring the how gender is much more fluid than that”; part of the problem here is that an audience unfamiliar with the trans community wouldn’t know what issues are being avoided or elided. Trans people end up having to make difficult decisions about whether it’s more important to have their experiences presented accurately or whether it’s more important to have a trans voice, albeit a mediated trans voice, visible in mainstream media.

Work to address transphobia and inaccuracies in media coverage of trans people is ongoing. Trans Media Action recently held Trans Camp, a workshop that identified five major issues to work on. Two of these issues specially concern media representation of trans issues; a third concerns “mak[ing] producers of comedy aware of who they are making comedy about”. Trans Media Watch submitted a 31 page document to the Leveson Inquiry arguing that “the highly adverse treatment of transgender and intersex people by parts of the press is a stark and instructive example of what newspapers (often but not exclusively tabloid) will seek to get away with when no effective formal or internal restraints are in place” and offering case studies and detailed recommendations.

As well as challenging the representation of trans people in mainstream media, trans people are also producing their own media. META magazine, a new magazine “for T-people by T-people” has just been launched.

As Juliet Jacques notes, “there’s a sense that the excuses that gatekeepers of mainstream liberal and left-wing spaces have previously used to keep out transgender perspectives — that the issues are too complicated, or that transsexual people somehow undermine feminist or socialist politics — are finally becoming untenable”. I hope this is the case and that trans people can look forward to better media representation but due to the nature of the power dynamic and how it manifests itself, I’m unconvinced it will happen unless trans people are in positions where we have more independence and control over media output. We’re getting there, but it’s a potentially slow process.