Why I’m not keeping calm 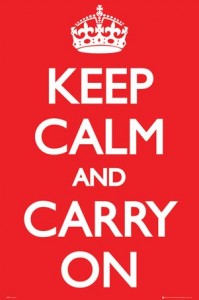 A confession: I am nursing an instinctive, visceral dislike of Keep Calm and Carry On posters and merchandise. It contains some of the things I like least – the smug nationalism, the invocation of “our finest hour” of WWII, the assertion that “keeping calm” is a morally superior reaction and that there is no point in getting angry. The image it summons is one of plucky Brits doing their best to carry on as normal among the bombs and the rubble. That war merely gives British resilience and stoicism to shine through, rather than being devastating.

I cannot help but notice that this poster has flourished in these days of the coalition government.

In whose interests is it that we “keep calm and carry on”? That we don’t question, don’t think, don’t disagree or protest but simply trundle on? I don’t think it’s in mine, and it’s probably not in yours.

Instead, I prefer the suggestion offered by this poster. Get Angry and Fight Back? I think I can support that.