Last year, I wrote about my slightly complicated feelings about Pride. As a result of some rather unpleasant transphobic incidents last year, this year the Pride organising committee offered the trans* group I help run our own tent and a bit of money to start us off. This was tremendously exciting – we’d never had a dedicated trans* area and we were determined to showcase the talented, diverse and creative trans* performers in our community, offer a space to our allies to perform in a friendly place where the complexities of their identities were welcomed, be a visible trans* presence at Pride and, perhaps most importantly, reaching out to people and making them feel a little less alone. 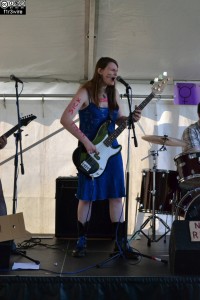 There’s an excellent review of the day by Ruth of Not Right and one of our members has a write-up and some photos on the group site.

Every single one of them was fantastic, bringing their words and music and loves and lives to the stage. Whether this was furious-but-fun punk, elegantly coiled poetry about the acronyms one must acquaint oneself with as a trans* person, sweetly tender songs about growth and uncertainty, bawdily defiant poetry, eloquent fierceness about femme identity or subversively genderqueer readings of opera, our performers were both affirming and challenging. It was an honour to be able to thank so many amazing people at the end of the day, from the performers to Jess who organised the majority of the day, our stage manager and our fantastic sound guy.

As an activist, I think about spaces. I think about the spaces that I challenge and create, and as I watched and applauded and ran around trying to locate performers I thought about the space that I’d helped open up in Pride. The spaces I am talking about are both physical – like the tent – but also more abstract. Space is also about what is given voice, what is allowed to flourish, the possibilities that can be articulated. Much of my annoyance at last year’s Pride was that it was a gay man, and possibly a lesbian, space. This is important, and I’m not disputing the significance of a space where people can hold hands with their same-sex partners and not feel that tiny prickle of concern even at the best of times – that anyone, anywhere, could suddenly take it upon themselves to vocally – and perhaps physically – object to that simple, unobtrusive affection. Other queer identities were less or not acknowledged however, and I found that really problematic. The LGBTQA community is a huge, diverse community and it’s really important to acknowledge and welcome that diversity. When that diversity is not embraced, it’s not simply an issue of our experiences not being given a voice, as isolating and unwelcoming as that is. A lack of trans* awareness contributed to some really upsetting incidents and the Pride organising committee were keen to avoid that happening this year.

There was something magical about being in a tent and being able to listen and watch people who articulated some of my fears and anxieties and desires. There were trans* people speaking and singing and playing about trans* experiences, and cis performers adapting and selecting their work to speak to us. Not us trying to eke out a trans* interpretation of a song or a poem, but them finding the points where we could understand each other. It was people exploring gender and all that came with it; negotiating the NHS, the harsh realities of genital surgery, the misery and joy we find in our bodies. When we started planning our tent, we were determined to bring a radical queer feminist perspective to Pride – something that we treasured in our communities but which we rarely found represented at Pride. In this tent we were able to do something special, and create a space that was visible and proud and joyful and intersectional and defiant. 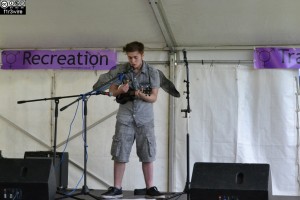 Obviously things went wrong (technical hitches, delays, transport issues for some of our performers) and I can only thank our performers for being so patient with us. I learnt a lot about managing an event like this, even though the learning curve was so steep it felt more like a ski slope.

I found it an interesting mixture of some of my academic interests and my activist interests. While as an academic I am interested in silences and space, this was an opportunity to put some of the things I’ve been thinking about into practice. Not just thinking about what trans* positive spaces might look like, but trying to actually create one and working out what needs to be done so it is a safe(r) and welcoming space. Theoretically, I want such a space to acknowledge the different and complex ways people identify, encourage exploration of intersectional identities and recognise that there is No One True Way of being trans*. I want this space to provide information and offer solace, to be able to engage with people. What this meant was looking carefully at who we’d invited to perform, having some basic guidelines for behaviour displayed in the tent, making information from a range of different organisations and about different issues available, and ensuring that the people covered in our trans* history information were from a variety of backgrounds and reflected some of the ambiguities of posthumously assigning a trans* identity to a historical figure.

It wasn’t the most academic way to spend a weekend – I’m pretty sure most academics don’t need to hire drumkits the day before an event – but it had impact. Not just in a research sense, although I do hope to work in areas of language and gender identity, but in the way we saw people come in to say hello or out of curiosity or seeking information, and leave feeling affirmed, moved, comforted. A trans* space was political for all the reasons I’ve discussed, but it wasn’t until the day itself that I realised how very personal it would be too.