Something I thought about, as I once again carefully packed my books into boxes and less carefully stuffed my clothes into bags, is the instability of PhD life. I’m told that some people do their entire PhD at one university, in one department, even while living in one place.

I am not that person.

In the almost exactly three years I’ve been working on my PhD, I’ve been at two different universities, been based in three different departments and so far, lived in four different houses. Weirdly, for something that is in a constant state of development and change, my thesis has been one of the few constants in my life. The other, somewhat worryingly, is my supervisor. Not sure how I feel about that!

In a way it’s made me a more independent researcher and that’s a good and positive thing, but sometimes I wish I could relax and be at least somewhat confident that I won’t have to move again for at least another nine months.

I have Thoughts on how it’s affected my research, my friendships and collaboration with other PhD researchers and on me as a researcher, but that can wait for another day – I have a chapter to write. 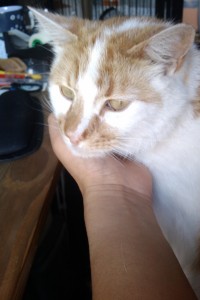 Oh dear, haven’t posted for a while. In the past ten days I’ve moved house, one of my pet rats had a lumpectomy and spay, I attended the NUS LGBT annual conference (where our LGBT Network won LGBT Society of the Year!) and I’ve been trying to compile my annual report. Tomorrow I’m going to a session on whether my thesis is publishable (hah), and on Wednesday I’ll be presenting at the annual Postgraduate Symposium in my department.

Today I was “helped” with writing my annual report by Itchy, one of my housemate’s cats. His help seems to consist of purring and kneading my leg with his claws, but I’m not refusing any help I can get.

At the moment, I would very much like it to be this time next week.

Activist linguistics, as I see it, does not mean that the researcher skew her or his findings to support one group or one ideology or another. Nor does it mean that a famous linguist use her or his fame to support causes. Rather, an activist linguistics calls for researchers to remain connected to the communities in which they research, returning to those settings to apply the knowledge they have generated for the good of the community and to deepen the research through expansion or focus. 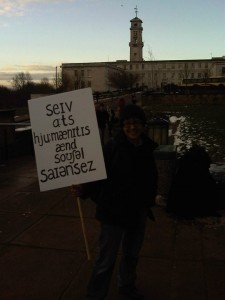 This is something I’ve been thinking about.

In some ways, my PhD research area is a deeply personal thing. It might be about a social movement and people and events a hundred years ago, but it encompasses areas that I care deeply about: gender equality, the theory and practice of protest, marginalised and disenfranchised groups, the interaction between ideology and practical legislative change. The photo is one of the more visible acts of protest I’ve done recently – it was taken on a cold winter’s morning before I went to London to protest about cuts to arts, humanities and social sciences. That experience led me to write this post.

I worried quite a lot about whether my personal politics would affect my research for the worse. Would it make me too sympathetic, unable to see the flaws in direct action? Would I end up hopelessly over-identifying with the subjects of my research? Would my thesis become a paean to the suffrage movement? Would I, too, end up setting fire to a boathouse? Worrying thoughts indeed.

But now I’ve started wondering about neutrality. Is actual neutrality even possible? I’m not convinced it is; to me it seems that you can simply not know enough about an issue to have an opinion, or that your apparent neutrality is itself a stance. I’m reminded of debates within feminism where those allegedly objective about it are actually hostile – there are some things it’s hard not to have an opinion about, and if you’ve chosen to distance yourself from an issue you’ve still made a choice about how you’re going to engage with it.

As I said in my post on direct action, being a protester has given me an insight into the kind of things the suffrage movement encountered. When I wrote that post it was police violence; as I write now, it’s the tensions between different groups and factions who are (roughly) campaigning for the same things.

As O’Connor suggests, things like this are going to inform one’s research whatever I do and my issue is one of how to allow it to do so, how to acknowledge it and be honest about its influence. There are different ways to engage with one’s activism and individual politics, and it’s clear which she thinks is best. As well as making for better research, I think the researcher also owes something to the community in which they’re embedded. As an undergraduate I was staggered by Jennifer Coates’ admission that she covertly recorded her friends for material. At the time it was an acceptable methodology to make such recordings; now it is most definitely not. I’m not studying NSAFC (if I was I’d tell them!) but that earlier post was still an attempt to apply my research to my community, to give back something – kind of connecting my experience as a researcher with my experience as a protester, and trying to synthesise them in to sort of whole I think O’Connor is talking about.

As a tangent, I stumbled upon Emily Davison Blues by Grace Petrie a couple of months ago. There’s a research paper in contemporary reimaginings of the suffrage movement, I know it.

Okay, I was going to go to bed at least an hour ago. Tomorrow brings more narrative theory and newsworthiness, yay?

I am aware that the internet likes cats, so here’s hoping that it also likes rats. I am led to believe that Pebble dictates posts to an obliging Knotrune, but my rats, in true academic style, are unable to reach consensus on anything (except possibly that yoghurt drops are worth squabbling over and sundried tomato is foul, evil and proof that no one loves them).

Anyway, today I had a productive day of sitting around looking helpful at the LGBT History Month display, attending a workshop on procrastination (ready for the inevitable comment of “no, I wasn’t putting it off”? Good), being interviewed by Andy Coverdale and coming to the conclusion that I really need to get one of these things commonly known as “a life”. Upon my return, I found that the darling ratcreatures had also been busy… 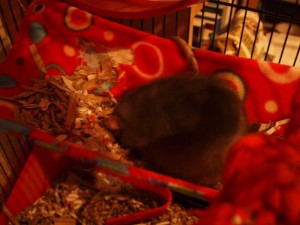 What you see there is a nice, new hammock made by Fuzzbutt Cage Comforts. At some point today, the rats chewed a hole in the fleece, then proceeded to fill the hammock up with cardboard bedding. Just…why? The way the cage is set up means there’s clambering and jumping involved to get into the hammock, the hammock is quite full of bedding, and they must have moved the bedding one mouthful at a time. Full marks for effort but just…why?

Incidentally, this is usually the kind of photo I take… 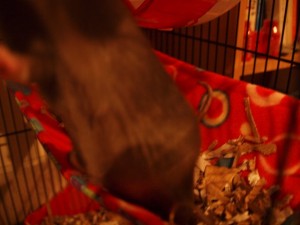 I’m trying not to dwell on the sheer futility of their actions because it will only encourage me to draw a comparison with my own life of writing a 80-100,000 word thesis maybe four people will read. Much like the rats climbing up the bars and rope to tenderly deposit their carefully gleaned mouthful of bedding, only to scurry down again in a cycle that must have lasted Quite Some Time. Only their actions might result in a comfy bed, and mine won’t. Carry on, ratlets. I am in no position to judge you.